Uses of the computer in various fields

Application of computer refers to the scope as well as uses of the commuter system. In the present context of the world computer is everywhere we find their applications in almost every sphere of life particularly in fields where computations are required to be done at a very fast speed. And where data is so complicated that human brains find it difficult to cope up with.

Some of the major uses of computers are:

Hotels use computers to speed up billing and check out the availability of rooms. So is the case with railways and airline reservations for booking tickets. Architects can display their scale models on a computer and study them from various angles and perspectives. Structural problems now can be solved quickly and accurately due to the computer. 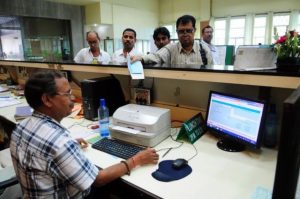 Banks also have started using the computer extensively. Terminals are provided in the branch and the main computer is located centrally. This enables the branches to use the central computer system for information on things such as current balance, deposits, overdrafts, interest charges, etc. Magnetic ink character reader (MICR) encoded checks can be read and sorted out with a sped-up 3,000 checks per minute by computers as compared to hours taken by manual sorting. Electronic fund transfer (EFT) allows a person to transfer funds through computer signals over wires and telephone lines making the world possible in a very short time.

The computer is finding its greatest use in factories and industries areas. They have taken over the work ranging from monotonous and risky jobs like welding to highly complex jobs such as process control. Drills saws and entire assembly lines can be computerized. Moreover, quality control tests and the manufacturing of products which required a lot of refinement, are done with the help of the computer. Not only has this, but Thermal power, Plants, Oil refineries, and chemical industries are also fully dependent on computerized control systems because in such industries the lag between two major events may be just a fraction of a second.

Today computers have made it possible for plans to land in the foggy and stormy atmosphere also. The aircraft has a variety of sensors, which measure the plane’s altitude, position, speed, height, and direction. A computer uses all this information to keep the plane flying in the right direction. In fact, the Auto-Pilot feature has made the work of pilots much easy.

Computers have proved to be excellent teachers. They can possess the knowledge given to them by the experts and teach you with all patients in the world. You may like to repeat a lesson a hundred times, go ahead, you may get tired but the computer will keep on teaching you. Computer-based instructions (CBI) and computer-aided learning (CAL) are common tools used for teaching.

The computer also uses for great entertainers. Many computer games are available which are like traditional games like cheese, football, cricket, etc. Dungeons and dragons provide the opportunity to test your memory and ability to think. Other games like Braino and Volcano test your knowledge.

The other important areas and uses of computer are: