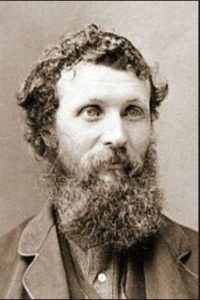 Stickeen (small dog) was taken to an icy region of southwestern Alaksha. He used to be slow & motionless. In this story, the writer shows the adventurous journey of Stickeen & his own. When Muir was away, he (stickeen) followed him & Muir also follow the hunter. Other time he aloof & indifferent one stormy day stickeen accompanied Muir. The level of a flood was hitting on their faces. They went to the west shore of glacier & on the return trip, there were many dangerous crevasses. It was difficult for the writer to cross them but stickeen cross easily. He was calm & following Muir. Finally, they were trapped in the place surrounded by a near of 50 foot wide crevasses. The writer made small steps on the vertical wall & across the silver bridge. On the other side, he had also made steps on the vertical wall to climb up. Thus he went across. But stickeen wisely know the risk while crossing the crevasses through the silver bridge. He ran, mourned, & grieved. The writer encouraged & warned him to cross. Finally, he tried to cross it very carefully & succeeded. Then he was completely changed. He showed uncontrollable joy. He sobbed, cried, shouted & screamed. Then, they reached safely. He never wants to be left to the writer & always looked at his face as if he were his God. After the trip was over he was taken by his master & later stolen by a tourist. Muir would not forget him.

Maybe this story is trying to tell us that there is no difference between human beings & animals. It suggests that if we are in danger place we do not feel hopeless but we used our idea, experience. It shows wide & tactical nature of the dog. Dog has philosopher quality. After doing an adventurous journey animal expressed their feelings like a Stickeen. Also, it taught to be a saint we should give physical, pathetic torture to our body. Maybe it also interpreted that there are many things which we find in animals & human beings. Friendship & gratitude are equally found in animals. Also, it explained the beauty of nature.

In terms of giving a positive lesson to the readers, it gives the right way to be a success in life in front of problems. However, this beautiful story has some points which are unacceptable us,

By reading this story I have learned many things about the glacier & the weather there. I came to know that life is succeeded by facing problems. Like the dog, stickeen I found myself changed. Now I understood better what the Buddha meant when he said that we should love all living creatures.

Four levels of parrot in the cage