Introduction to a personal computer (PC)

To give an exact or universal definition of the computer is not a simple matter because of its broad scope. However, we almost get various definitions of the personal computer. Hence, maybe we defined it in our way.

What is a personal computer (computer)?

A computer is an electronic machine or device for performing calculations and controlling operations that can be expressed either in logical or numerical terms. In a computer, calculations related to arithmetic. Where arithmetic is a branch of mathematics that consists of the study of numbers, especially the properties of the operations on them: addition, subtraction, multiplication, and division. Hence, a computer also called an arithmetic computer. In simple words, a computer is an electronic device that accepts data using input devices then store and process them to generate the desired output.

Also, a computer is an automatic but straightforward device to use or operate for the user. The primary process of the computer is that it accepts raw data or instruction from the user or outside and that raw data is processed after the process is completed it gives the output or result to the user. In comparison to human beings, a computer works too much faster than a human it is because a computer is an electronic device. In this way we characterized the computer system:

Characteristics of computer or personal computer 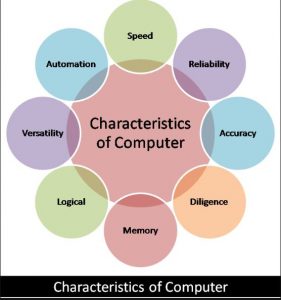 There are various characteristics of the computer, some of them are:

Some advantages of computer are:

If you want to take it on your mobile phone or personal to read offline you can also download to PDF file of this article. Introduction to a personal computer