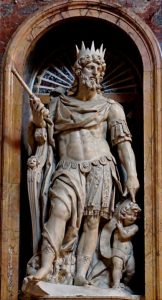 The story ‘ King Davids Crime ‘ taken from ‘Holy Bible’. In this story, King David sends Joab in the battle with his commanders, servants & he stay at Jerusalem. At the evening David arose from his bed & walked upon the roof of King’s house, from the roof he saw a beautiful woman bathing herself. He sent to inquire about a woman, who was Bathsheba wife of Uriah. After knew he wants to lay with her. When she became pregnant he asked Joab to send Uriah.

May this story is trying to show us that the cruel as well as merciless behavior of King David. It shows to king misused/ overused his power which effect is the misfortune of people. Also, maybe it interpreted that everyone tries to be free from rules and want to live a free life. Similarly, it shows the nature of the king.

The story from the moral and religious point of view is not well appreciating a or believing whatever king jas done. But in the modern world, many peoples are not following others rules as well as tries to be free. Where they use their own rules to achieve their desires. But in the story, King used ordinary peoples rights for their personal benefits. And, people are unfortunately in the problem. Hence, I am not fully satisfied with this text.

When I read this story “King Davids Crime” it reminded me at the events of politician activities. Where the politicos used their servants & general peoples to earn own name at election time. In this way, the servants & ordinary peoples do whatever to fetch his or her required position, because they have some hopes towards the politicos to do something for us. But, when the politicos win, he used their rights, power for their personal benefits, not for the peoples & development of the country. Like the same condition displayed in this story where the king used their rights for his personal benefits.

Four levels of the Cabuliwallah