The Brave Little Parrot is an ancient story. That related to the natural events of the animal’s life. This story mainly focuses on the selfless service of Little Parrot. Its four levels part literal comprehension, interpretation, critical thinking/ analysis, and assimilation are: 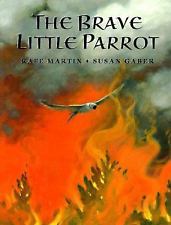 Once upon a time, Lord Buddha was born as a little parrot in the forest. One day a storm fall upon the forest & the whole forest was caught & fire. All animals & birds started running away to save their life. The parrot also flew towards the save place. But as he was tined he was fly the over a forest, he saw his fellow animals trapped in the fiery forest & he decided to do something to save their life. As he flew to the river & dipped into the river, flew back over the forest & sprinkled the drops of water from his body & figures but they vanished before reaching to the ground. Although he got tired & his all body was hot, he repeated this activity time & again. In that time the Gods above were watching the foolish at a parrot.

And laughed at him but one of the gods felt pity for him. And changed himself as a Golden Eagle. Then came to the parrot & said him to stop such a hopeless task & save his life. But the parrot didn’t take his absurd advice & replied that he expected his help in his mission. Being impressed by the efforts of parrot, his shade the flow of tears over the forest, which could extinguish the fire & he give new life to the parrot, birds, animals & trees. The birds & animals look at the parrot flying happily with new life & they were surprised seeing the parrot with different colors like green, red, white & an unusual happening. At last, the story shows how a small parrot saves the life of animals & birds in the forests by his courageous efforts.

The story is quite impressive in terms of giving the moral lesson to the readers. The main gist of the story is that courage, hope, self-respect, patience & determination are the best way to solve any kinds of problems. The story displays that one should fight for the things one believes whether it has a reasonable chance of success. Or not it is a duty to carry out the task but the result is not in our hand. The story also reflects the powerful once laugh at the trouble of others instead of helping them. Only the person who has suffered knows that is suffering is like & is ready to share the troubles.

Similarly, the story teaches us that the importance of human virtue is services & sacrifice & services to the fellow in meaning are the actual services of God. Greatness & littleness is not something physical instead of it is related to the character & behavior. In the story, the parrot was tiny but mentally & spiritually he was very high & if he hadn’t been so courageous, determined & dedicated to his moral duty, he couldn’t have been able to get the support of God & put out the fire of the forest.

The story “The Brave Little Parrot” from the moral & religious point of view is well appreciating. But in the modern world, people are so busy & selfish that it is almost impossible to get a man like a parrot helping to others selflessly. The fact of human nature is that it is essential to think about personal protection first & then the protection of others. So I am not fully happy with some statements of this text
Are the Gods are always selfish towards the trouble of human beings?
Is it possible for modern readers to believe still there is an existence of Gods?
Is it possible to believe Golden Eagle extinguished the fire by his tears?
So, I am not entirely happy with this text.

As I read this story “The Brave Little Parrot” it reminded me once of the incident that took place in my village. When I was 10 years old my hut which cut In fire many people were gathered there & they heard a small baby crying inside the burning hut. But nobody was ready to save his life & ultimately ventured to get into the hut & save his life. Hence, the story has encouraged & inspired me to be involved in selfless services.

four levels of the parrot in the cage