A fight between a lion and a crocodile (Lion Crocodile) is a nature story. That related to the natural events of animals. Four levels part of this text Literal Comprehension, Interpretation, Critical thinking/ analysis, and Assimilation are: 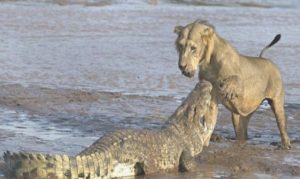 A Fight Between a Lion & a crocodile

This story starts with the journey of the narrator. One day the narrator & his friends sleep on the bank of the river at the late evening.  They heard different kinds of sounds. Job told them to look towards the water. They saw the lion & lioness signing eyes to each other from 15 feet away. Leo fired at the lioness & she died. A fully grown lion (male) was to step behind her. Suddenly, that time a crocodile cut him by the leg. They did fight for a long time, the lion felt to defeat the crocodile & died after some time the crocodile also died.

In terms of a positive point of view, this story is interesting to read for the readers. Where it showed the natural beauty of the world. However there are some doubts in my mind,

Is the crocodile more powerful than a lion?

After reading this text I am fully convinced that all animals are equally important in the eco-system. Every animal has its importance in its own place. But if they go to the place to place of other animals, they will be defeated. Therefore, every living thing can identify its habit, acts & lives accordingly.

Four levels of Why go to University